Rape Conception: Mind your Language While Defending My Rights

All rights reserved, except that permission is hereby granted to freely reproduce and distribute this document, provided that it is reproduced unaltered in its entirety and contains this copyright information: © 2006 Pandora’s Project, http://www.pandys.org – an online support group, message board, and chat room for rape, sexual assault, and sexual abuse victims and survivors.

This article is written anonymously out of respect for my daughter and her family.

I will commence this article with a brief history: In my late teens, I became pregnant by rape. I opted to keep my child.

I have never been sorry for my decision. However, I am pro-choice, and for me that means that women who find themselves pregnant by rape must be free to choose what will be right for their life circumstances, be that termination, adoption, or keeping the child.

Although it was very tough to be put in the position of having to make such a choice at all, keeping my child was for me, the most empowering choice. Decades later, I remain convinced that had I terminated the pregnancy, or relinquished my child for adoption, I would have been more severely traumatized. I am talking about me here; I do not attempt to extrapolate on what is true for others. In turn, I would like others to not make assumptions about what is true for me, and other women who keep rape-conceived children. This is what this article is really about.

Since the time I was pregnant by rape, I have been very aware that people have strong opinions about rape-conceived pregnancy. I feel the utmost disgust and disdain for the people of the world who pontificate about “legitimate rape” shutting down the possibility of a pregnancy, together with those who insist that the pregnant rape victim must view the rape as a “Gift from God”. These people selectively ignore situations that do not fit their political agenda. It’s a fact that some women (and their children) do experience very great hardship as a result of being made to continue a rape pregnancy. Importantly, as a mother who kept her child, I refuse to be held up by the pro-life movement as a heroine at the expense of my sisters who terminated.

To tell a woman who has experienced sexual assault how she must feel or what she must choose denies choice to her yet again.

Hence, some of the language used by the “other side” – the pro-choice side – my side, over the years has saddened, angered and frustrated me too. It is not possible to view any online debate these days without hearing that carrying and giving birth to a rapist’s child is a dreadful woe without any redemption. Invariably, the poor mother has to live with that reminder, with horrible consequences for herself and the child. Professionals may generalize in this way too. For example, Linda Ledray’s book, Recovering from Rape, reluctantly tells us that a woman may choose to keep a rape conceived child, and then cites one disastrous example.

I have found myself being silenced over the years when I suggest that raising the child may not in fact be so dreadful for all of us. I have been howled down and dismissed by people who felt that speaking about my choice meant that I was “encouraging” pregnant rape victims to have their babies, or was inherently judging other women who hadn’t had theirs – something I have never, ever done. It seems to me at these times that I am the one being judged! Evidently, having a positive story makes me a rabid anti-choicer by default. What do I do? Sometimes it really has felt as though some people of the pro-choice persuasion want me to take my positive story and go away because it doesn’t fit with the scenario they want to create. It is fair enough if they are just focusing on the very real negative impacts that can result from rape-related pregnancy. But quite often they are more fixated than focused.

I do not wish to imply that I have met with these attitudes in all pro-choice settings, but I have noticed them sufficiently often. And I have had enough.

What Hurts the Most

I raised a beautiful child, and I have become most wearied and saddened by reference to rape-conceived children as “spawn”, “evil seeds” who are in some cases conflated with the perpetrator. It is right to talk about the consequences of forcing women to bear rape-conceived children. I absolutely do understand and empathize with a survivor who may see a rape pregnancy as spawn or part of the perpetrator that she could not possibly contemplate having. I have supported such women. It is not what I felt, but I am just me, and I respect that what is for me isn’t for another. What I would like is understanding and sensitivity for the fact that I love my child more than life.

I am writing this article because I recently had a very unpleasant and upsetting encounter, and it pushed me towards what I would call Critical Mass. I had read an article in which the author casts himself in the role of a rapist who has impregnated a woman. I wasn’t too crazy about his tone of unmitigated horror with respect to women who have rape-conceived children, but I understood that the author was attempting to generate empathic thought about the plight of such women. I think the satire was an effective vehicle for his points even if it was rather unsettling, and I was in the main quite pleased with the article until I made the mistake of reading the comments. Some were great, and there were the usual references to “spawn” coupled with generalizations about the impossibility of keeping the rape-conceived child.

But then I read this: “Do the folks who oppose abortion even in the cases of rape really want our genetic pool populated by these individuals? On a strictly pragmatic note, the perpetrators of rape are violent criminals who do not possess qualities that I would want propagated through our gene pool.”

This first chilled my blood, and then I cried and cried, feeling as if I would never stop. One of “these individuals” is my child, my little girl who is about as far from her biological father in nature as two people can be. What she has “propagated through our gene pool” is love and light She’s funny, spunky and generous. She has given me a beautiful, smart little granddaughter with an uncanny empathy, whom I welcome home from school every afternoon, and for whose presence I had to calm myself down on the day I read this.

Many people who champion a raped woman’s right to make her own choices in the case of pregnancy, quite rightly speak about the “reminder” that the woman will have to live with if she keeps the child. Beyond a certain point though, the sepulchral tones about “reminders” begin to flick on the raw. All rape survivors have to bear reminders, and for some of us, a child may be far from the worst.

I am asking that champions of choice please understand that seeing my child vilified as a monster or as dirtying up the gene-pool of humanity, is far more hurtful to me than any reminder of rape could ever be. You may mean well, but your assumptions and generalizations hurt. You are a reminder of times when I was made to feel like a freak for keeping my baby, or she was treated as not good enough because of where she came from. Please think about how distressing that can feel. You speak of the dire ongoing consequences for women who have rape conceived children, but words like the above, and actions like muffling those of us who are happy with our choice are also deeply hurtful consequences.

When you defend women’s rights to choose, you defend my rights. But you need to be respectful of all women’s choices. You do not truly defend choice when you make blanket statements about parenting rape conceived children. You can convey respect by making sure you clearly mark the difference between choosing to have a rape-conceived child, and being forced to have one. These are not mutually inclusive, they are not mutually repellent. Do not wave me away with lip-service, drowning me out with talk about how terrible it is. When you talk about rape and abortion rights, be aware that it is deeply hurtful to me to have it suggested that my born child is less than human. Stick to the point and stick to what you know; women must be allowed to choose termination because that choice is their right, not because a resulting child would be no good anyway or because a woman couldn’t ever possibly parent such a child. You don’t know this. Be factual.

I hope my beloved daughter never reads the statement quoted above. She found out about how she was conceived some years ago, and was heartbroken. I truly feared for her at the time. It was apparent to me that the rape had harmed somebody else, and she didn’t deserve to hurt because of somebody else’s actions.

You people who use passionate but injudicious words, help to ensure that rape goes on hurting others. Please don’t. Just don’t dictate how we must feel, and don’t level dehumanizing terms at the children we love. Yes, it is appalling for a politician to suggest that rape is a gift from God. But, without attempting to foist my view on others, don’t I have the right, personally, to call my child a gift; the only decent thing I got from my ordeal? May I not revel in a choice that brought me healing?

Maybe this article will help other women who may be feeling very alone with their choice. You are not alone; I stand with you.

Where to Get Support

When I stated above that I have had no comfortable place, I meant within the political paradigms of pro-life and pro-choice. I have, of course, been lucky to receive loving support from other survivors of rape at Pandy’s. If you’re facing rape-related pregnancy now or in the past, you will be very welcome to ask and receive support there. 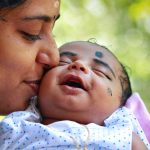 BREAST-FEEDING AS A SURVIVORParenting after Rape and Sexual Abuse